Earlier this year, the Magic Kingdom debuted a new nighttime show called The Magic, The Memories and You! It is a wonderful addition to the entertainment offerings at the park and is very unique. Using state-of-the art, high definition projectors, Disney transforms Cinderella Castle into a canvas unlike anything ever seen before. The castle comes to life like a giant, three dimensional movie screen that is difficult to describe and really needs to be seen in person. I had the opportunity to view the show in July and it was breathtaking.

In addition to the vibrant and colorful images displayed on the castle, there is also a moving soundtrack that embodies the typical emotion you'd expect with a Disney World show. However, what I've described so far is just the background to the actual theme of the show. The subjects displayed on Cinderella Castle are actual guests who were photographed in the Magic Kingdom earlier that day. The pictures come from the thousands of shots that Disney's PhotoPass photographers take throughout the Magic Kingdom each day. All of the photos taken before 3:00 pm are taken under consideration to be used in The Magic, The Memories and You! So, it is entirely possible that if you are visiting the Magic Kingdom on any given day, your picture may be displayed during the show for everyone to see. Now, these images displayed on the castle vary in size and are only visible for a few seconds, but it must be quite a thrill to see your family in the show. 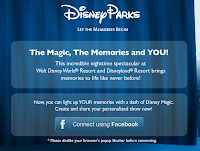 The chances of your PhotoPass picture making it into The Magic, The Memories and You! are pretty slim. Even if your photo makes it into the show, it may be very difficult to recognize as quickly as most of them appear and disappear. However, Disney has now made it possible for all of us to experience a little magic, similar to what is seen in the show.  They have created a website at www.disneymemoriesshow.com that brilliantly mixes some modern technology with social media to give us the ability to see our own pictures on Cinderella Castle in a scaled down version of the The Magic, The Memories and You!

Disneymemoriesshow.com is a very simple website to use. You simply click on the spot labeled "Connect using Facebook" and that is all there is to it. The site then goes into your Facebook account and imports your pictures to create the show. In a matter of moments, Goofy is standing there amidst your photos hanging on a blue curtain. Before you know it, the curtain opens, the music picks up, and the castle appears. You are now treated to your own, mini version of The Magic, The Memories and You!


If you have a Facebook account, I highly recommend heading over to www.disneymemorieshow.com. In addition to creating your own version of The Magic, The Memories and You!, you can check out a condensed version of the actual show from Walt Disney World. Incidentally, Disneyland also presents the show on a nightly basis, but at that park it takes place on the huge mural of it's a small world. You can also see a condensed version of the Disneyland show at www.disneymemoriesshow.com.

Have a Disneyriffic day and remember to keep moving forward. See ya real soon!
Posted by Dave Drumheller at 10:47 PM