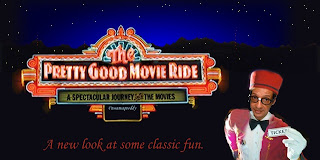 As I've mentioned in past articles, there are entire websites devoted to individual Disney park attractions. PrettyGoodMovieRide.com falls into that category.......sort of. For those of us who love Hollywood Studios, it is pretty easy to tell which attraction is highlighted on this website. In a nutshell, the site is a tribute to the final scene of The Great Movie Ride. As a matter of fact, the entire movie montage that concludes the ride can be seen here. However, this site offers much more than just one video.

PrettyGoodMovieRide.com was created a few years ago by Glenn Whelan. It is a fun website that is simple, yet very entertaining. It contains six videos that are easily accessible in "theaters" that can be entered right from the homepage. The first montage is the original Great Movie Ride conclusion that was seen back in 1989. It brings back great memories for me as I visited Hollywood Studios many times in the early 90s. Theater 2 contains the best montage as it is an extremely creative "variation" of what is found on the actual ride. Glenn does an amazing job of picking out clips from over 100 "pretty good" movies and setting them to a familiar soundtrack. The quality of this video is fantastic and most of the clips are from movies that I have enjoyed over the years. I can't even imagine how long it must have taken Glenn to create this mini masterpiece, but the final product turned out to be just over three minutes of pure entertainment. Also, much of it is laugh-out-loud funny!

The third video on the website takes us out of The Chinese Theater and over to the original version of "The Magic of Disney Animation." There was a great montage of animated features that was shown to guests when the animation building was an actual working studio. Glenn brings us this eight minute movie as it was seen back when the Studios first opened. Theater 4 takes us back over to The Great Movie Ride and into the pre-show area. Here we can see the queue line trailer film that introduces riders to the movies that are depicted in the actual attraction.

The final two videos on PrettyGoodMovieRide.com showcase the updated versions of the original conclusion montage. The movie in Theater 5 is from 1999 and the final one is the 2009 version. Although a majority of the clips are the same as the original, scenes were added for contemporary relevance. Most of the additions are from Disney owned films. This a great website for Hollywood Studios fans to see the changes that were made over the years.

I would highly recommend checking out PrettyGoodMovieRide.com even if it only consisted of Glenn's original montage. However, the other five videos are great bonuses that shouldn't be overlooked. For those of you who follow the Disney online community, Glenn can often be found contributing to Lou Mongello's WDW Radio Show Podcasts and Newscasts. His most recent sighting was part of the crazy group of Disney enthusiasts who assisted Lou on his 40 hour live show a few weeks ago. Lou and his dedicated team of volunteers helped raise over $17,000 for the Dream Team Project, which helps send seriously ill children to Disney World through the Make-A-Wish Foundation.

Have a Disneyriffic Day and remember to keep moving forward. See ya real soon!
Posted by Dave Drumheller at 11:22 PM