Today we say happy 2nd birthday to Bay Lake Tower at Disney's Contemporary Resort. It is the newest resort at Walt Disney World as well as the first to be added to the monorail line since Disney's Grand Floridian Resort in 1988. Bay Lake Tower is also the most recent addition to the Disney Vacation Club and is my family's "home resort." After many years of procrastinating, we decided it was time to become DVC members and we were very excited to purchase at this brand new resort only one month after it opened. 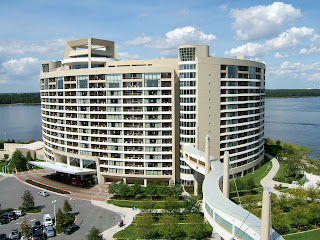 Although we have had the pleasure of staying at other DVC resorts since we became members, it was just a few weeks ago that we first stayed at Bay Lake Tower. We were there for four nights and had an amazing time. The first two nights we stayed in a studio, which is basically a deluxe hotel room with a kitchenette. It was up on the 12th floor and had some amazing views. From our balcony we could see attractions at Epcot, Hollywood Studios and Animal Kingdom, which are all more than three miles away. We also had a great view of Bay Lake and the Wilderness Lodge. If we stuck our heads over the railing and looked around the corner to the right, we could also see part of the Magic Kingdom. We enjoyed this room immensely and didn't think it could get any better.......but it did. 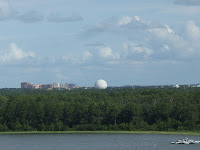 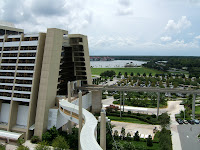 In planning this Disney World trip, we decided to book the second two nights in a one-bedroom villa at Bay Lake Tower. We had some DVC points that we needed to use and thought it would be fun to try out a different type of accommodation. While we were impressed by the studio (and its great views) we were absolutely blown away by the one-bedroom villa. First, we couldn't believe how big it was. There is a very modern and fully equipped kitchen, large living room area and huge picture windows. There are two bathrooms and the bedroom includes a jacuzzi and a large flat screen tv. Although this villa is considered a "lake view," we were able to choose one that also had an amazing view of the Magic Kingdom. The ability to watch the Wishes fireworks display right from our balcony was a real treat and the view of the sun setting over the Magic Kingdom was breathtaking. 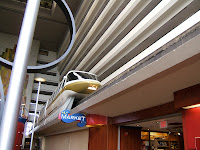 Attached to Bay Lake Tower is a covered walkway that connects to the grand concourse of the Contemporary Resort. More specifically, to my wife and son's delight, it brings you right into the gift shop area of the hotel. From there it is a short escalator trip up to the monorail platform where you can board a very unique form of transportation that has been moving guests around Disney World for almost 40 years. The Contemporary is also the place that houses the restaurants and check-in desk that are used by guests of Bay Lake Tower. 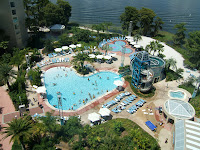 In addition to the well appointed villas and fantastic views, Bay Lake Tower has several other unique features. First, there is the Top of the World Lounge which is only accessible to DVC members who are staying at the resort. As the name implies, it is on the roof of the building and includes an indoor seating area with a full bar that also serves appetizers. Bay Lake Tower also has a unique pool in the shape of Mickey ears that includes a nice water slide, hot tub, and pool bar. We spent several afternoons swimming here. 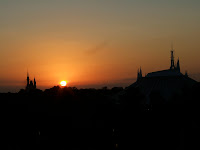 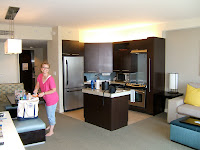 Of all the great things about Bay Lake Tower, the best feature has to be its proximity to the Magic Kingdom. It was so cool to be able to walk out of the front door and literally walk to the most popular theme park in the world in less than five minutes! It was also nice to be the first stop off the monorail at the end of the day. All in all, I would have to say that Bay Lake Tower has quickly become our favorite place to stay. As a family who had typically stayed at value resorts, becoming DVC members has opened up a whole new level of Disney vacationing possibilities for us. I can't recommend DVC enough to anyone who vacations at Disney World on a regular basis. When breaking down the numbers, we are staying at deluxe villas for less than the cost of the least expensive value resorts. The only mistake we made was not becoming members a long time ago. Please feel free to contact me with any questions you may have about Disney's Vacation Club or anything else you read about on my site.

Have a Disneyriffic day and remember to keep moving forward. See ya real soon!
Posted by Dave Drumheller at 11:45 PM