Today we say happy 12th birthday to The Many Adventures of Winnie the Pooh attraction at the Magic Kingdom. Opening on June 4th, 1999 in Fantasyland, it is a 3 minute "dark ride" where guests ride in honey pots through different scenes showcasing Winnie the Pooh and his friends.  These honey pots are advanced ride vehicles that are capable of making you feel like you are bouncing as well as floating in water. It is a fun attraction that is enjoyed by guests of all ages. 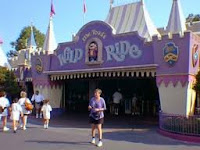 The Many Adventures of Winnie the Pooh was not the original attraction to occupy its current location.  From the Magic Kingdom's opening day in 1971 until 1998, this spot was home to Mr. Toad's Wild Ride.  Also a dark ride, this attraction was a favorite of many park guests.  It was based on the characters from the children's novel, The Wind in the Willows. Although it featured outdated, two dimensional figures and props, it was a fun ride and still exists at Disneyland in California.  For those of you who never had the chance to ride the Florida version of Mr. Toad, it was unique in that there were two separate boarding areas and the vehicles traveled through different show scenes.  However, the Magic Kingdom version was similar to Disneyland's in how the ride concluded.  Guests head down a dark tunnel and apparently collide head-on with a train.  After the collision, the ride vehicle travels through the final scene which features fire and devils bouncing up and down. I'm pretty sure that this is the only attraction in "Disney" history where guests die in a horrific motor vehicle accident and end up in hell!  However, all is well when the ride concludes and guests "escape" to the unloading area and disembark.

When the Imagineers created the Winnie the Pooh attraction, they payed homage to Mr. Toad in several ways.  First, observant guests can find paintings of Mr. Toad and Moley near the beginning of the ride in Owl's house.  The one of Mr. Toad depicts him handing the deed to the attraction over to owl.  The other major way that the imagineers created a lasting tribute was by placing a Mr. Toad tombstone in the back of the pet cemetery on the grounds of the Haunted Mansion.  It was their way of memorializing a classic attraction that many people feel should never have been removed.  As much as I like The Many Adventures of Winnie the Pooh, I was certainly disappointed when they removed Mr. Toad and look forward to eventually riding the Disneyland version in the future. 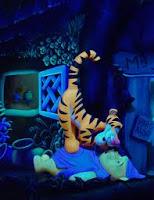 The Many Adventures of Winnie the Pooh is a very popular attraction and the lines are typically long throughout the day.  Thankfully, it is a ride that utilizes the FASTPASS system, which allows you to come back later in the day with virtually no wait.  However, less than a year ago, the queue was completely refurbished and has now become "interactive."  While waiting, young children can walk through a set of hands on exhibits that parallel the normal queue.  As guests get closer to the loading area, there are virtual "walls of honey" that can be rubbed by kids and adults, revealing beloved characters from Winnie the Pooh.  Disney is doing an amazing job of continually adding interactive queues throughout the parks with the most recent example found over at the Haunted Mansion.  As with many attractions in Walt Disney World, guests disembark the Many Adventures of Winnie the Pooh right into a gift shop.  It is always a fun challenge to see how quickly we can rush our four year old through the store and towards the next attraction.  I mean, at this point he has probably conned us into a Pirate sword and something with ears on it!

Have a Disneyriffic day and remember to keep moving forward.  See ya real soon!
Posted by Dave Drumheller at 10:04 PM